Notes on walking the city of Oslo, part three

Wherein I meet a real Nakholmer and have just enough daylight left to try to find Roald Amundsens hjem at Svartskog.

Notes on walking the city of Oslo, part three

The day after I walked around Bygdøy–a mid-July Friday morning that dawned clear and increasingly warm–I took the No. 92 ferry to the island of Hovedøya, intent on completing a series of photographs of the Cistercian ruins.  Waiting for the ferry at Vippetangen, an elderly pensioner came and sat on the bench next to me.  In the shade of a warehouse, he initiated a friendly chat in English, until I insisted on switching to Norwegian, which he followed in equally friendly indulgence.

Why was I here, he asked.  It was a question one heard over and over.  Living in the perfect country, Norwegians seem yet surprised when outsiders trouble themselves to come this far north, even for a brief glimpse of perfection.  Or maybe they are simply reassuring themselves that you will not be staying long.  The old man was a retired creative arts editor, and his face cracked into a bright grin when I mentioned writing poems.  He lived across the fjord in a house on the Tangen peninsula.  He had a vacation home in the Canaries.  And he owned a simple summer hytte on Nakholmen, a brilliant rock sitting in the fjord more or less between Bygdøy and Hovedøya.  He was going to Nakholmen now. 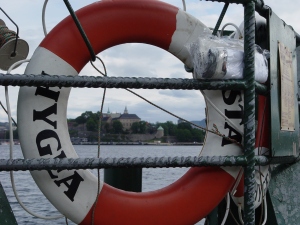 Don’t you own a boat? I asked.  It would make for a much shorter trip from Tangen to Nakholmen.  Oh yes, he answered.  He had two boats.  But he liked taking the ferry.  That way, he got to meet new people and talk to them.     I knew something of Nakholmen.  Before I’d arrived in Norway, I’d seen on the internet, properties for sale on Nakholmen.  They were idyllic, romantic, sun-poured huts, and one could easily imagine writing novels there amid half-emptied wine bottles and pregnant lovers.  Now a real Nakholmer had introduced himself to me, and he was an old man with bushy gray hair and old mismatched clothes.  He would have been mistaken as homeless if encountered in Philadelphia.  Here he owned two homes and two boats, to go with a place in the Canaries.  He gave me the number of his hytte on Nakholmen and asked me to visit.  I promised I would, but when I’d left Norway a month later, time had gotten away from me and I had not made the journey.  I regret this.

After photographing the ruins, it was not yet noon.  There was still time if I hurried.  I left Hovedøya and then from the ferry dock at Vippetangen walked toward Oslo sentrum in search of the No. 19 trikk, or tram, to Ljabru.  After a few minutes of standing on a corner near the central station, the No. 19 pulled up.  It hummed past the old Oslo Hospital, past the sjømannsskolen and Café Utsikt, then glided toward quiet remote Ljabru.  The station at Ljabru consisted of a tear- drop turn of track laid into a bowl of granite and trees.  Neither the granite nor the trees had been leveled or otherwise modified.  The track had been made to accommodate the landscape, not the other way around.  From this toy train station at Ljabru, it was a roundtrip walk of more than twenty kilometers to Roald Amundsen’s fjord-side home at Svartskog.  I had no car, refused the bus, and there were no closer tram stations.

So from Ljabru, I started out on a well-established walking path, partways tarmac and partways dirt or gravel, as it wound downhill through the suburb of Ljan.  There, a long winding foot/cycle bridge crossed the E-18 highway and became a dirt path, wide enough for a vehicle.  The path led to the edge of the fjord: granite shore-slope interspersed with tiny strands of sandy beach.  The air smelled like cold perfume, the path lined in the uplands with scrub pine and granite outcroppings, along the fjord with smooth granite shields.  These waterside slopes cradled women, young and old, sunbathing and swimming without tops or cares.  I hurried past, with just enough sunlight to try and reach down the fjord to the home of one Roald Engelbregt Gravning Amundsen, the greatest explorer in history.

This entry was posted in Uncategorized. Bookmark the permalink.